During his life Philip Aughey has combined a love of music, especially that of Chopin, with the love and care of thoroughbred horses. There may not seem to be an obvious connection between the two until you reflect on the capriciousness, sensivity and awareness of being a creature set apart that charaterizes both exceptionally talented composers andmusicians, and the noble horse.

Both from his study of piano and lengthy research Philip Aughey has come to a close understanding of the Polish composer. In his protrayal of Chopin, reminiscing towards the end of his life, he highlights both the triumphs and difficulties that Chopin encountered: ill for most of his life, living in the world of aristocrats though never accepted as ‘one of them’, never finding lasting happiness in love, and exiled from his beloved Poland and his family still living there.

Despite this, Chopin composed and performed the music that we still love to hear. The narrative is told with humour, pathos and drama. The music serves to support elements of Chopin’s life, and while Philip Aughey does not reach the brilliance of his compatriot, Roger Woodward, he does convey the spirit of the composer and his conflicts through his playing. This perfomance gives a new awareness to the life and music of a great composer. 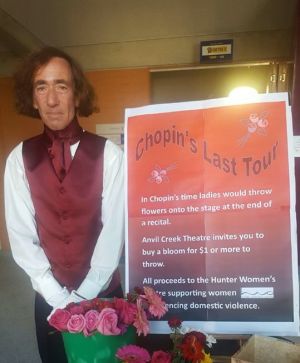 Accomplished actor/pianist Phil Aughey delivers an impressive performance on two fronts with Chopin’s Last Tour – performing six of the great man’s most iconic compositions with impeccable precision, and in between, regaling the audience with impassioned dramatic monologues “in character” as Chopin himself.

The musical highlights include a strident treatment of “Etude No I2, Opus 10: Revolutionary” and a melancholy rendition of “Nocturne No 20 in C Sharp Minor”. The very familiar “Fantasie Impromptu”, probably Chopin’s most famous composition, also makes an appearance, albeit in an abbreviated form. Aughey’s performances of “Prelude In E Minor”, “Waltz In C Sharp Minor” and “Etude No 3, Opus 10: Tristesse” are more conventional, though no less technically impressive.

The dramatic component of the show, in which Aughey relates Chopin’s struggles with illness, difficulties in forming long term relationships, the mixed critical reaction to his work and the political turmoil of the times in which he lived contain a surprisingly balanced mix of pathos and dry humour. Though his Polish accent sometimes slips when Chopin is angry, this is a small nitpick in what is overall an intensely charismatic performance.

For fans of the composer, Chopin’s Last Tour is a must see event at this year’s Adelaide Fringe Festival. 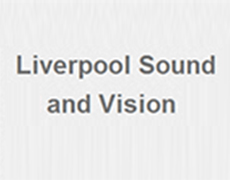 The allure of the Edinburgh Fringe is such that no matter where in the world the theatre company or performer is based, the call of the Scottish lowlands and gentility of Edinburgh is never too far away. Especially when it offers a perspective of a composer of such repute as Chopin but told with great nerve to highlight his time in the country before his early passing from Tuberculosis, such is the effects of Chopin’s Last Stand.

Australian Phil Aughey’s one man performance at Zoo on behalf of Anvil Creek Theatre is one that might not immediately spring to mind as being a progressive piece in which the audiences of the Fringe might truly want to be immersed in. However, under the soft spotlight gaze afforded to all performing at the venue during the run, Phil Aughey’s reading of the man whose slow descent into a world that he did not truly enjoy as he roamed in the dank air of Scotland after his relationship with female novelist George Sand failed is one that sits very much in the reflective and the wonderfully brooding category of this year’s month long event.

The single piano on stage representing arguably the singular thoughts possessing Chopin as the disease and his broken heart began to be ravaged by the passing of his time on Earth and the heavy judgements he finds he harbours as the country of his birth, Poland, gets invaded time and time again as its prime position nestled between superpower after European superpower takes more out of him than he thought possible. It is an analogy that might bypass some as the thought of hearing clear and concise arrangements delivered by a full orchestra are far removed from those of a composer wrestling with the final days of his life and that once more of his country.

For Phil Aughey this perhaps is a trip and a production of a lifetime and one that he captures with great sincerity; a homage to a great man as he enters the last days of his productive and art filled life, but one filled with images he cannot displace. 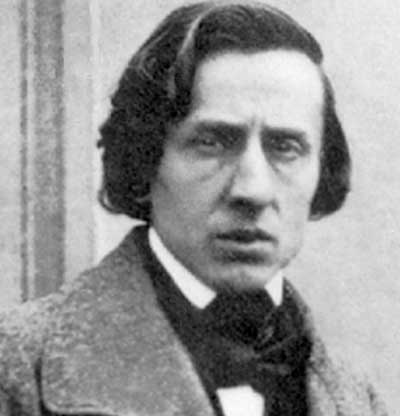 FREDERICK Chopin, while now a much-appreciated composer, had a mixed reception in his lifetime, and preferred to perform in salons rather than in large music venues. His irritation at the demands made on him by patrons comes through in the opening moments of Phillip Aughey’s look at the factors that moulded Chopin’s life and the music he wrote. He’s railing bitterly when he comes on stage alongside a piano about the way two Scottish sisters have taken control of his movements by organising a performance tour throughout Britain.

It subsequently becomes clear from his raving that Chopin needed to get away from his long-time home in Paris after the break-up of his relationship with female novelist George Sand, and that the Scot sisters, one of whom was attracted to him, saw Britain as offering him the needed change. Branxton-based Aughey, as the writer-performer of Chopin’s Last Tour, makes the composer a very down-to-earth figure, and shows how the people and events of his life influenced his music.

The 50-minute work, which had its first performances last week at Newcastle’s Royal Exchange, a salon-style venue that would have pleased Chopin, is bound for the Edinburgh Festival Fringe which begins next week.

Audiences there, like those in Newcastle, will be fascinated when hearing the familiar music pieces played by Aughey to learn the factors that led to their writing.

The Etude No. 12, Opus 10, “Revolutionary”, for example, was his response to a Russian invasion of Warsaw in November, 1831, a year after he left Poland at age 20 to move to Paris. His love for his homeland is very evident in the majestic piece.

Likewise, when the composer talks about his life with George Sand, the Prelude in E Minor, written on the warm Mediterranean island, Majorca, when he escorted the woman and her children there in 1838 to escape a bitter Paris winter, shows his affection for her at that time. And the passionate feelings he had for family members, who remained in Poland after his departure, comes through in the gentle finale, Nocturne No 20 in C Sharp Minor, which he dedicated to an older sister, Ludwika, at the time of his departure.

Chopin’s Last Tour, set in Scotland 12 months before he died from tuberculosis he had long suffered, gives Chopin a humanity that makes his piano music even more engaging.