Island in a Sea of Confusion Reviews

Fringe Festival a Cut Above 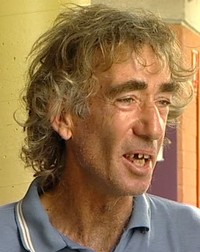 THE 2017 Newcastle Fringe Festival included an engaging collection of locally produced theatre works, including the premiere of a play by festival producer Phillip Aughey.

That work, Islands in a Sea of Confusion, looked at a man and woman meeting on a street years after they were university students, a time when the man, Lalio, had a passion for the woman, Isabella. The two communicate with each other via social media, and eventually have a reunion at a hotel.

The 40 minute work had good performances from Mark Calwell and Alexandra Travers. They were most frequently seen with their laptop computers, musing over what they should say in their messages, with their thoughts showing uncertainty about renewing their relationship. The messages they eventually sent, delivered by recorded voices, were more positive and affectionate. But their get-together left watchers wondering what would happen next. As one of them had noted earlier, “How can you love someone when you can’t love yourself”.

The festival also included a performance of Aughey’s 2001 comedy, The Exchange, about two old timers having long drinking sessions in a country pub, and watched by an unimpressed barman as they argued over such things as whose turn it was to pay for the beers. It worked well on the floor of the Circus Avalon tent, with Matthew McFarlane and Brad Burgess as the bickering pair and Aughey as the barman.

McFarlane also put together and appeared in a 60-minute cabaret-style revue, Conda! Conda! Conda!, which had joking references between sketches and musical numbers about what CONDA Award categories they could be nominated in. McFarlane was joined in the sketches by members of the accompanying band, The Flaming Balls of Fury, with band members, especially Flame Kimbell and Mark Bailey, joining in the acting. The sketches included a tribute to the late Darby Street music performer John Pittman and amusing references to meals with relatives, with one followed by the song Let’s Get Stoned with Grandpa.

Two Tall Theatre presented a moving production of Katy Warner’s Dropped, a 60-minute play first staged at the 2013 Melbourne Fringe. It showed two women, who were isolated members of a military team and based in a wrecked and snow-filled building, discussing things that had happened in their lives, though each occasionally questioned the other’s version. There was Samuel Beckett-style avant-garde comedy in their conversations, but the story became increasingly heartwarming as the pair talked about rescuing babies who had lost their parents. Sarah Gordon and Pearl Nunn gave engaging performances, under the direction of Amy Wilde.