Who's shout is it?

The original idea for "The Exchange" was conceived in 1981. Full of ambition to write about Australia, I decided to go for a Sunday drive around Australia, which took 9 months.

For the majority of the time I found myself in the shearing sheds of northern Queensland, working as a roustabout. I worked for a mob called 'Little Brothers Shearing'. They had three gangs which had a run from Hughenden to Isisford. They also owned a pub in Muttaburra, called "The Exchange". On the week ends when shearers came, it was a rage.

I asked myself the question, what would this pub be like if the shearers never came to town?

The Exchange, is really a very typical country hotel. The seemingly happy, but really quite bored and mundane bar staff. The regulars, who are there before opening time; and the very slow pace of life in the bar.

Having spent my educational years on my parents rice farm west of Griffith, on the edge of the Hay plain; given a great fascination for absurdist theatre; and after continuing my travels through the outback I could easily draw a correlation between existential theories and the outback. I find the outback the most impressive part of our country; it’s vastness, it’s peace and it’s beauty, very inspirational. The people who live in it are, to varying degrees, a product of it. Hence, the humour is very dry.

The original draft was written whilst working on a thoroughbred horse stud between Cowra and Boorowa. With the help of one Rita MacCormack, it was work shopped at the Que theatre, Penrith. Work shopped, it certainly was. Originally it had a cast of 8, this was changed to 5, with a lot of re writing at night. However, it was performed, and did actually work. Afterwards, one of the directors came up to me and said.

"I really liked your play. Now I want you to keep the two old blokes, and you can keep the barman, but get rid of the rest and go away and rewrite it."

I then went for a little drive to the Alice, driving through the outback by yourself can lead to many a good idea, came back to Griffith and re wrote by free hand and then typed "The Exchange", (as it currently is) in 6 weeks. That was December 1988.

In 1991 it was performed as a play reading, directed by Rob Steele, for the Griffin Theatre. It was well received and was contracted for a season in 1992. However the artistic directorship was changed and all previous plans were scrapped. There it sat until 2000. One Friday night I was having a couple of quiet ones at my local pub, the Royal Federal at Branxton, thinking I really must do something with "The Exchange".

I was looking at the bistro space beyond the bar, realising it had always been a principle of mine to bring theatre to the people, rather than expect people to go to theatre, I asked Dave, the publican, whether he had ever thought of putting on a dinner/show at his pub. Dave replied,

And plans were soon underway. It took me 18 months to find two actors who were capable, and off we went rehearsing. We were to perform 3 dinner shows on Thursday nights in November, leading up to Christmas.

It worked an absolute treat. The three shows soon extended to nine. Not bad for a little country town. Even Dave now thinks dinner/shows are a good idea. That was November 2001.

The inspiration for "The Exchange", the "Exchange Hotel", Muttaburra Pub. 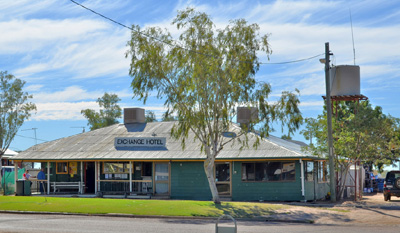